So as I have been moved to a new area called Da Ya, in Taizhong. It is an hour north by train from my previous area, Dou Liu. I heard a lot of good thing about the ward so I am excited to serve here. However, I am kind of sad to leave Dou Liu at the same time. It has been the area that I've served the longest in (4 1/2 weeks). And leaving my trainee, Sister Hsu there make me a little mellow about it. I wish I can take her everywhere I went. It has been an exhausted but meaningful (get a lot of stuff done to strengthen the branch) 3 movecalls in Dou Liu. It is also the most united disctrict I have been in so far. We elders and sisters really help and encourage each other a lot and work in one purpose. I really pray that my new area will be the same too.
I don't know too much about my new companion, Sister Rohlfing yet but I'm sure I will have more things to say about her. She seems pretty cool. She is from Hawaii, she is a half Japanese and half American. As far as I know, she sang beautifully. She came in my Sister Hsu, so she just finished her training too. I love being a greenie breaker! Probably the most excited time because they know enough about the missionary work by this point, and there are more you can share and learn from each other.
Another excited thing about being more north is that I can go to the temple being in Taizhong !!!! Eventually. I am been looking forward to go to the temple since I got on the island!!
So a funny story about the movecall:
I was hoping that I will move to either Taizhong or Changhua  when I was pretty certain I will be moving. And my hope was confirm by my Zone leader who 2 weeks ago was the assistant who help with the movecall. However, on Saturday night when my district leader called, he told me I am moving to Gao Xiong which is the province I was in for 6 months beginning of my mission. I was a little disappointed knowing that I won't have a chance to go to temple being in the south again. I just felt not right even after saying a prayer and reading scriptures to calm my heart. I was hoping the Lord will give me some answer through the scriptures why am I going back to Gao Xiong. Something just doesn't feel right. Then, on Sunday night, as the Zone leader called to tell me the train schedule, he said: so the train to Taizhung leaves at 10.30am. I was like what? no, I thought I am going to Gao Xiong? Then we realised another zone leader thought I was another "Chen Jia Mei" (we have at least 5 chen jia mei in our mission), so he told my district leader a wrong area. You guys have no idea how RIGHT I felt about it when I know that I am coming to Da Ya, Taizhung. So there's a hiccup about this movecall.

Anyway, since I got into the area a little later, we can't have 2 full hours for the email time this week. I need to get some shopping done now. Sorry a bit rush.

Love you all,
SIster Ting xoxo 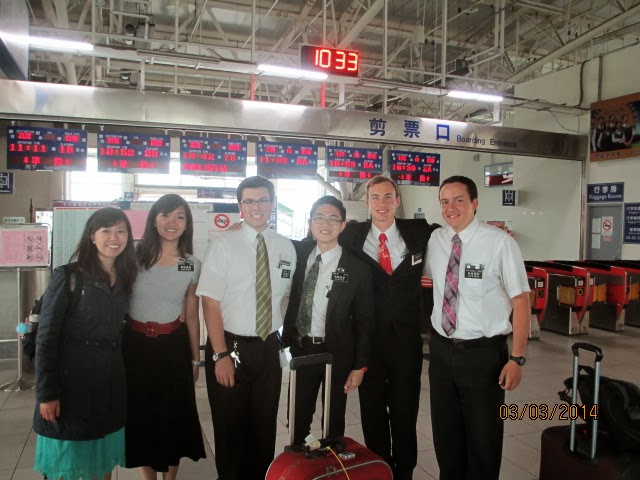 Me, Elder Yeh (my distrcit leader) and Elder Stratford (served in another branch) are leaving Dou Liu at the same time. Two of them about going home~~ Best district ever!!! 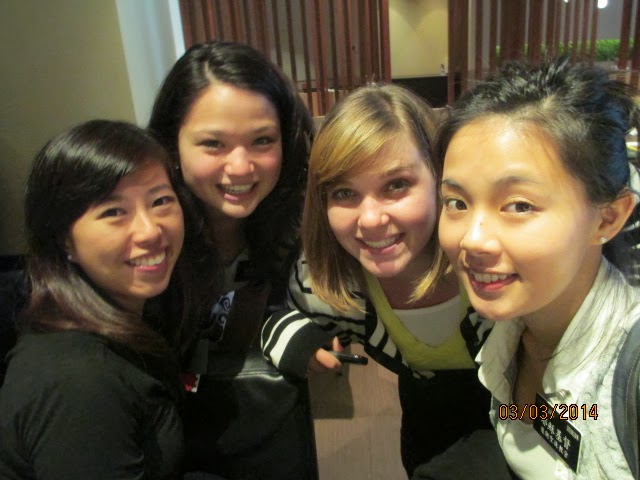 Me, my new companion, Sister Rohfling, with my trainer, Sister Jian (Taiwanese) and her companion. We met them in Taizhong before sister Jian moved to Tainan.