I guess my notion of  posting a "monthly" blog entry had failed for the past few months. The motivation of posting here has been decreased since using twitter and Instragram. See that's the problem.. there are too many ways/social network to publish my current status, pictures, videos etc that sometimes makes me feel "oh why bother?!" However, I have no intention of closing down my blog like the last several times so I shouldn't neglected it for too long ^^.


Well, to sum up what's happening in my life since my last entry (seriously I have had a hard time to recall and need to look up some pictures to remind myself what I did in the last couple months :p) is basically work, food/friends, church and Korean TV show.


Don't think anyone reading this blog is interested reading about my work so I'll skip that since nothing much to say there. Work is just work. I find that food and friends are inseparable. Whenever I hang out with friends, it always involved food... breakfast, lunch, dinner or dessert, which really doesn't help with my slim-down-plan. I'll try sports next time.. I promise! ;p  Not sure how many people who read this blog like
K-pop trend now but I'm quite into it at the moment. I have always been a Korean drama's fan (on and off) over the years, however, I never really pay much attention to the korean music until recently I watched a Taiwan drama which starred by 2 members from SuperJunior... that is when my attention towards K-pop start. After the drama, I unintentionally watch a Korea famous TV show called - We Got Married, where  the show pairs up Korean celebrities to show what life would be like if they were married. The episodes that featured Nichkhun and Victoria Song couples (one from Thailand and one from China,but become singers in Korea ) give me a very deep impression and open up my interest in K-pop/Korean TV show (mainly if they have my fave artists.) 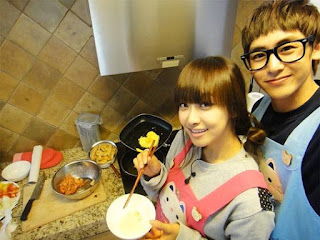 Nichkhun and Victoria in WGM ^^

Oh yea, one highlight from last month was when I attend the New Kids On the Block/BSB concert!! After all those years sitting in front of TV, watching the BSB DVD concert and wondering if I will ever have the chance to go to their concert...Finally ~~~ after 15 years, my childhood dream came true. NKOTBSB concert... *thumbs up*

you can watch 'running man'. I think quite nice korean show! some is very funny.